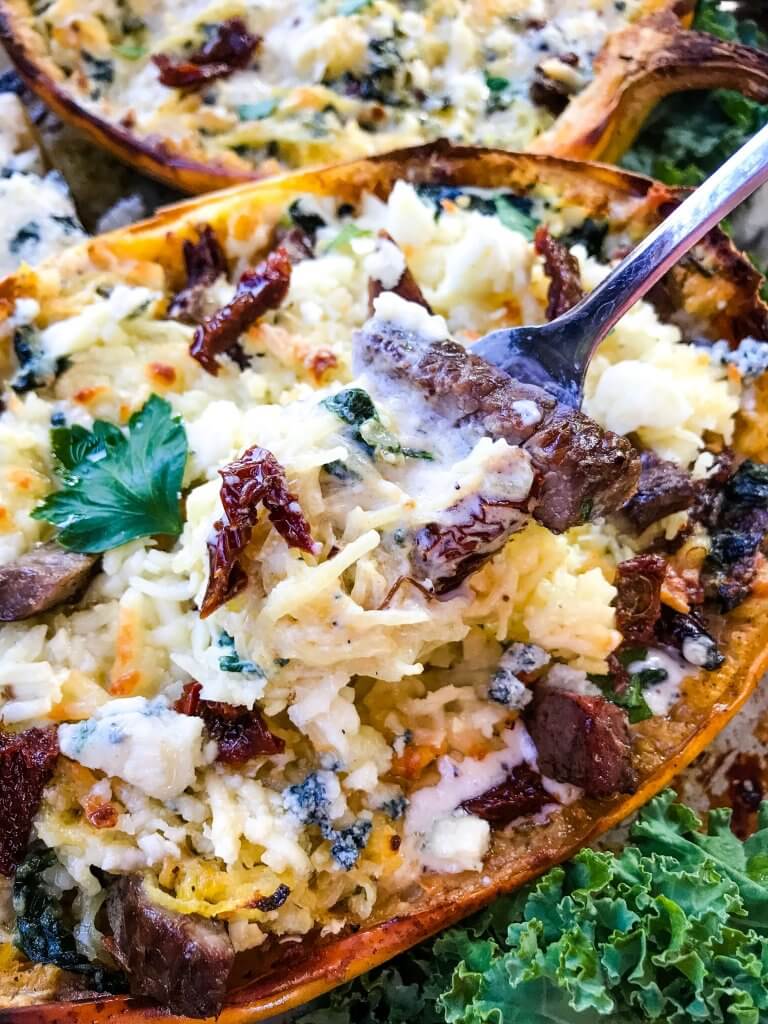 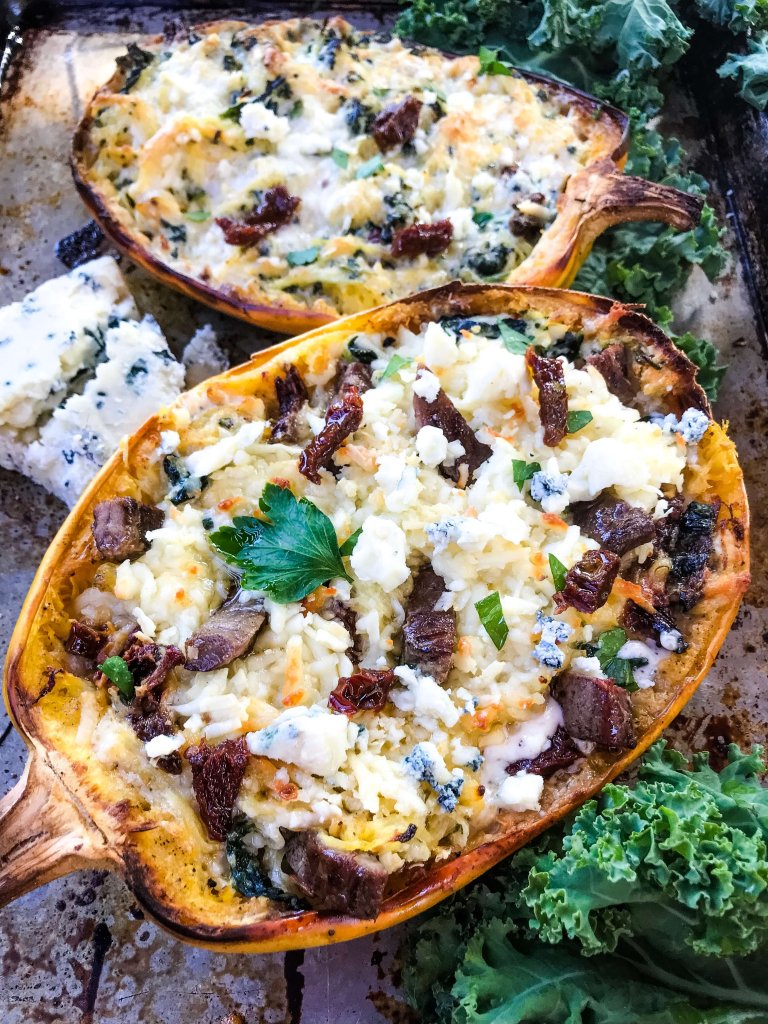 My Copycat Steak Gorgonzola Alfredo is one of the most popular recipes on the site, most commonly in the top 3 every single day.  And with good reason, because it is delicious!  This Keto Low Carb Steak Gorgonzola Alfredo Spaghetti Squash recipe is a keto and low carb twist on the classic.  The same great flavors are all mixed inside a stuffed spaghetti squash instead of with pasta. 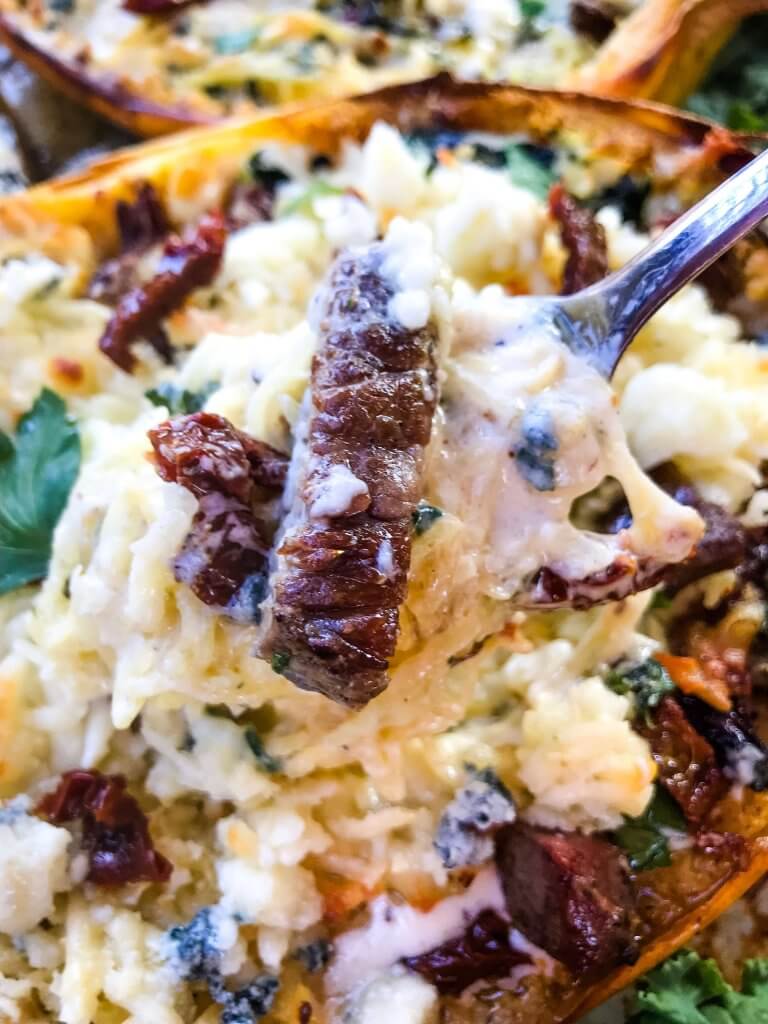 This spaghetti squash recipe is filled with a cheesy, delicious homemade alfredo sauce.  When I started out trying to perfect it, I wanted it to be as good as Olive Garden’s.  But I think it is BETTER!  I am obsessed with it, which also makes it dangerous, so I need to consciously not make it too often since it is so rich.  The sauce is mixed with gorgonzola cheese crumbles (or blue cheese), sundried tomatoes, and spinach.  Classically, this should also have balsamic, but balsamic is not keto friendly.  So if you are just looking for a healthier option, but not worried about keto, add some balsamic to the steak or drizzle the finished squash with some balsamic glaze.  Yum! 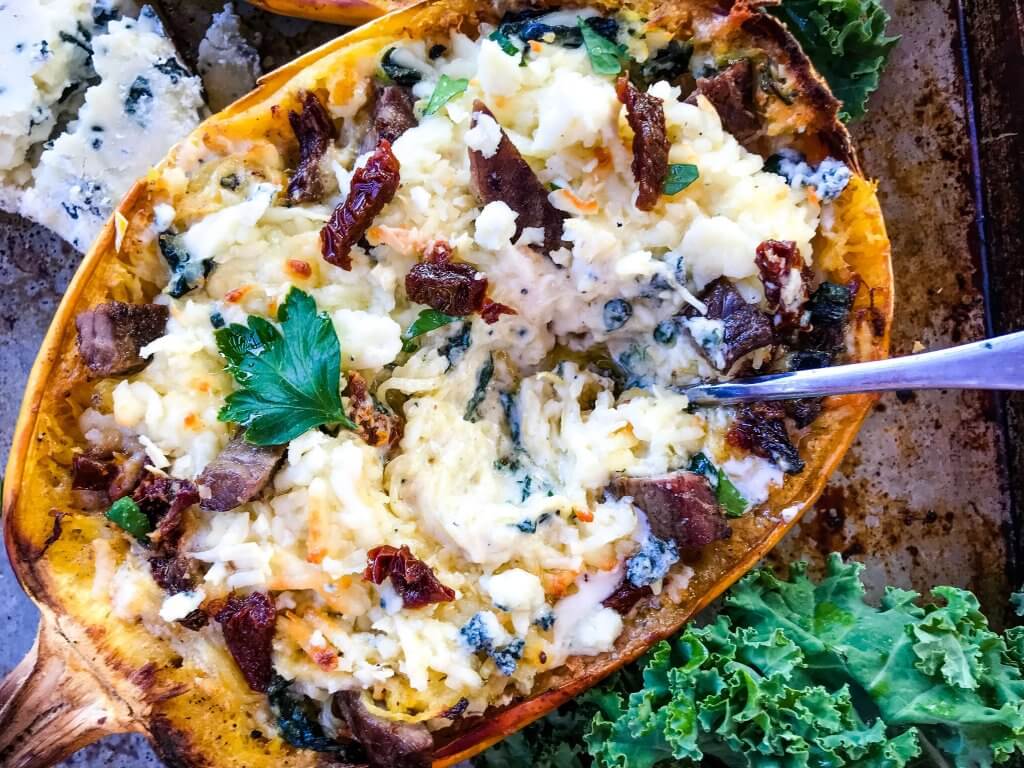 If you have never had spaghetti squash before, I encourage you to try it! I am not a squash person in general, so I was really skeptical about it.  But it is actually good and a great substitute for pasta!  Part of the trick is thinking of it as an alternative to pasta and not the exact same thing.  The squash is like a crispy, crunchy angel hair and does not carry much flavor, especially when you add everything on top of it.  If you want to transition to the idea of it, you can always cook just a little regular pasta and mix it in, I find this helps as well in getting used to it.

The stuffed spaghetti squash is also very filling, even more so than pasta.  Just 1/4 of this recipe is more than enough to make me full, so it goes a long way.  Find more spaghetti squash recipes here! 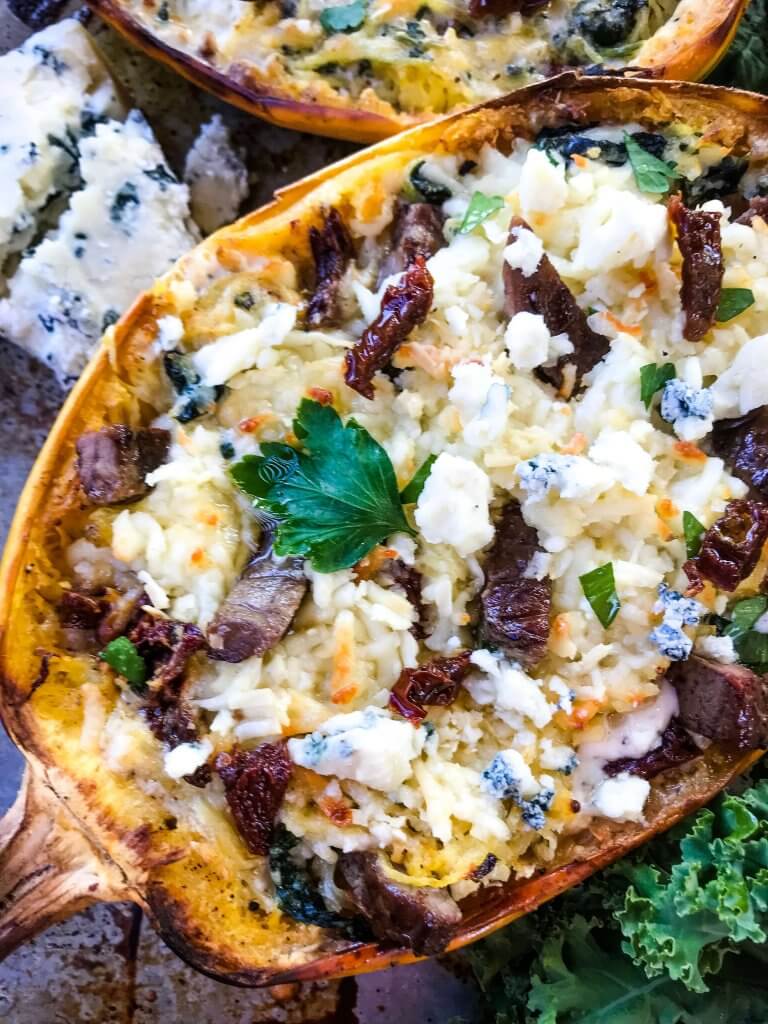 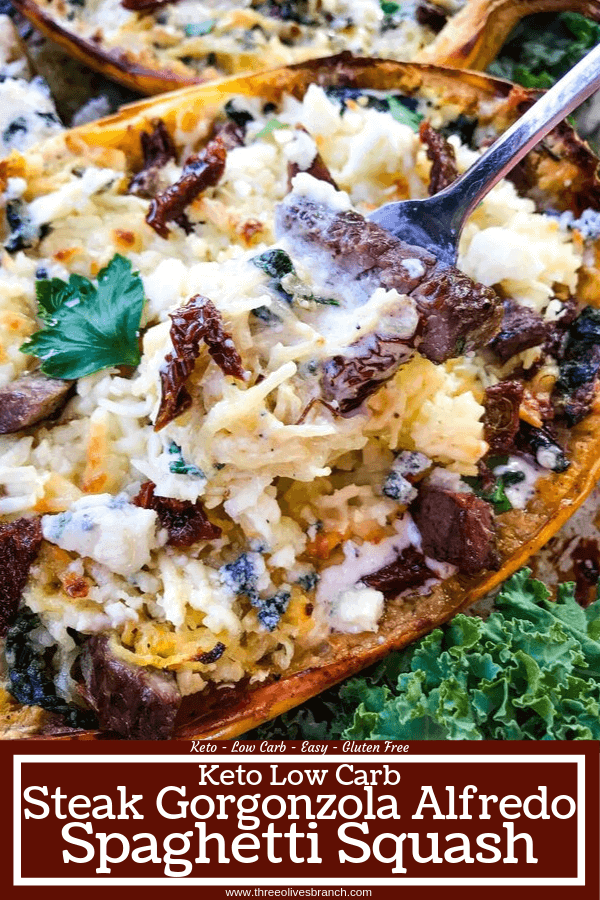 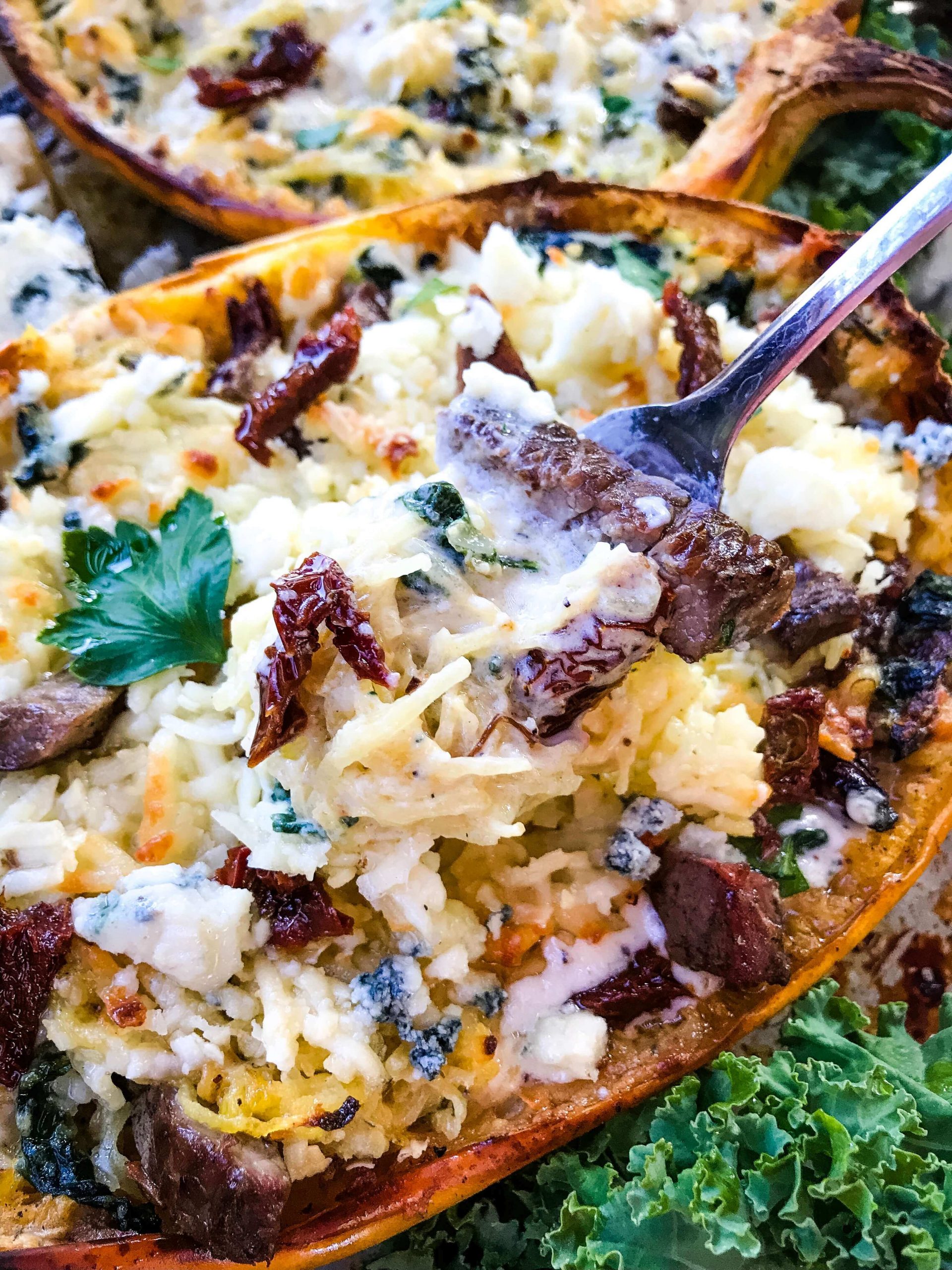 Any cut of steak here will work, so use your favorite. You can also substitute for leftover steak that is already cooked (approximately 3/4 pound cooked for same yield). The alfredo sauce is best fresh, but all other components can be made in advance.