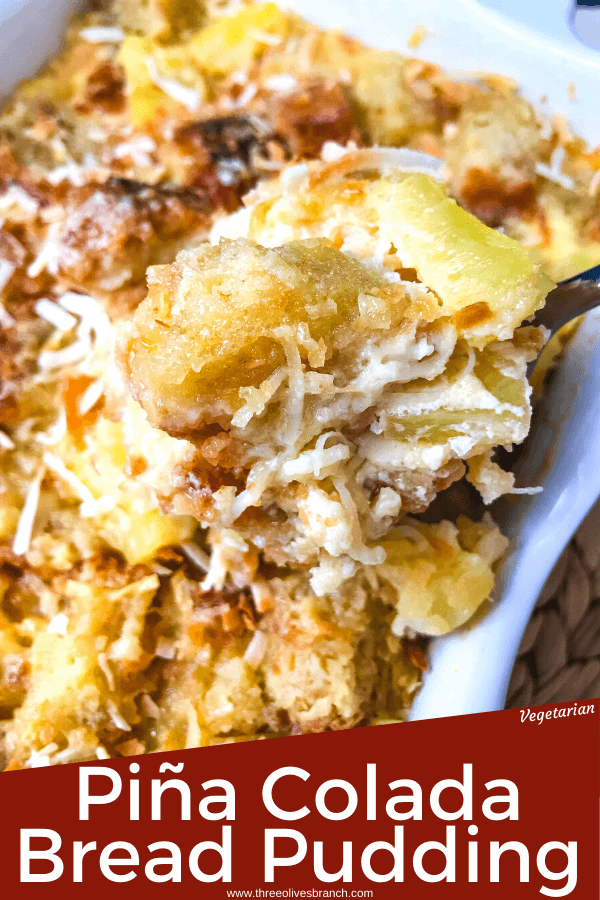 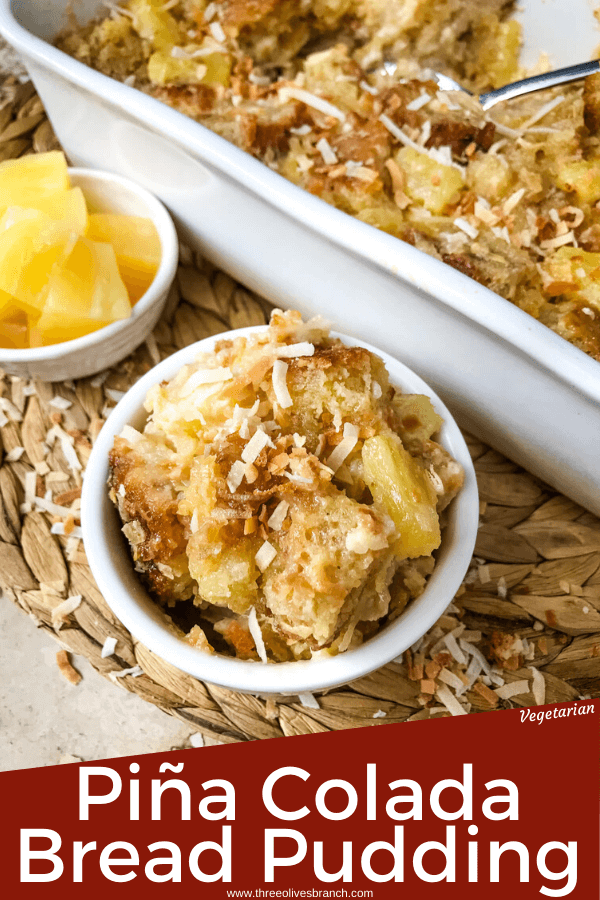 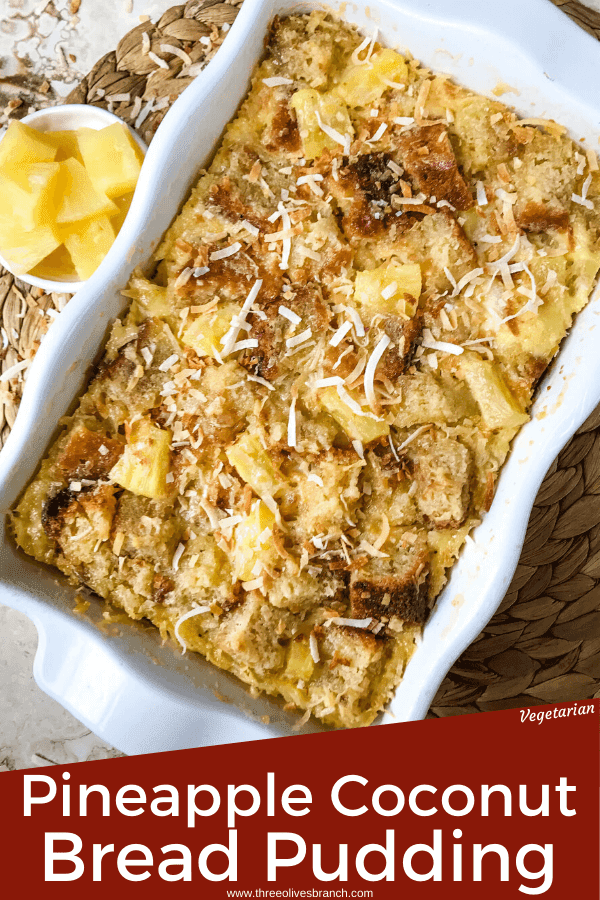 Pina Colada Bread Pudding is a tribute to the rum cocktail, full of coconut, pineapple, and rum! An easy bread pudding dessert recipe. 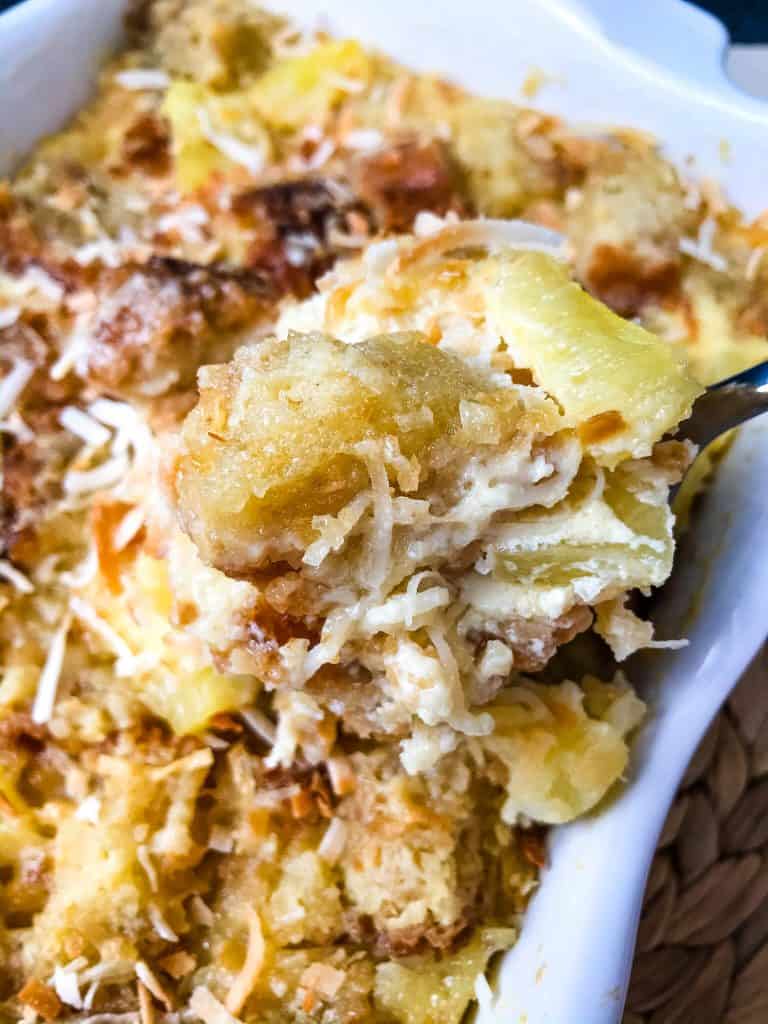 When I made this bread pudding recipe, I had the pina colada song stuck in my head for DAYS. Primarily just the chorus, really, where it asks if you like pina coladas. And now that I brought it up, you will probably think of it, too, but hopefully it does not linger for so long. 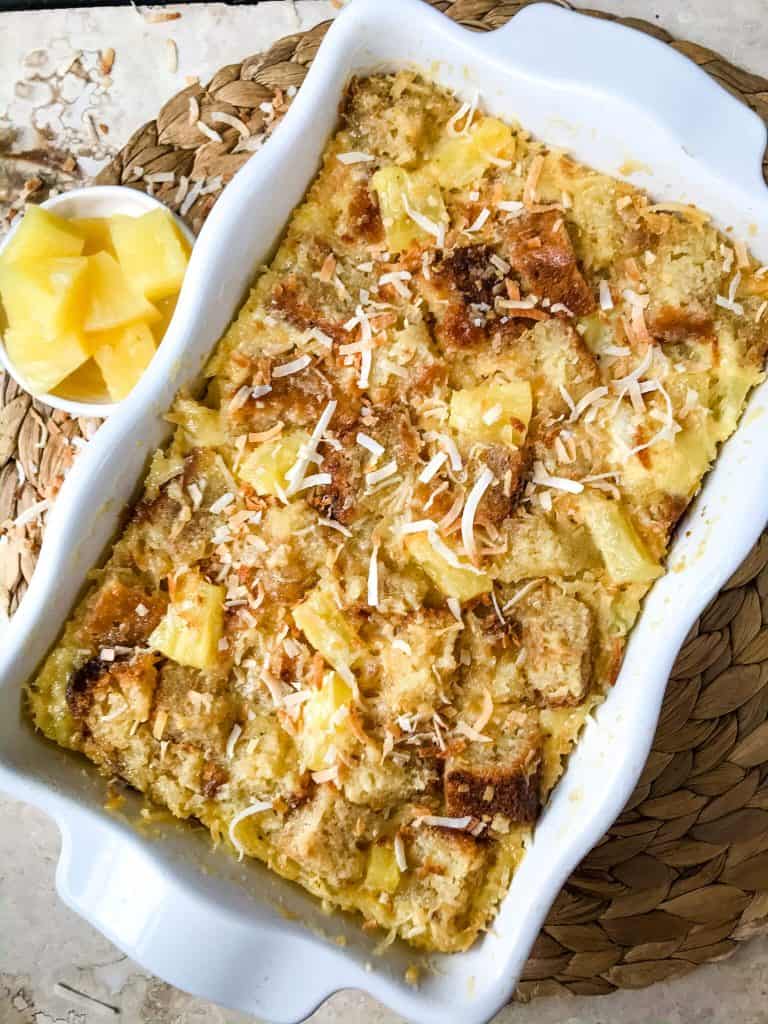 You can use any bread you like here, such as French bread, but I like to really emphasize the coconut flavor by using my Quick Coconut Bread recipe. One loaf is the perfect amount to make this bread pudding. This recipe does make a pretty large dish of bread pudding, but it can easily be halved (just skip the extra egg yolk) which means you have half a loaf of coconut bread to enjoy in other ways! These pictures show a half batch, and you can see there is still a lot of dessert to go around! Either canned or fresh pineapple will work great in this recipe. I like to leave the pineapple in larger chunks but still bite sized. 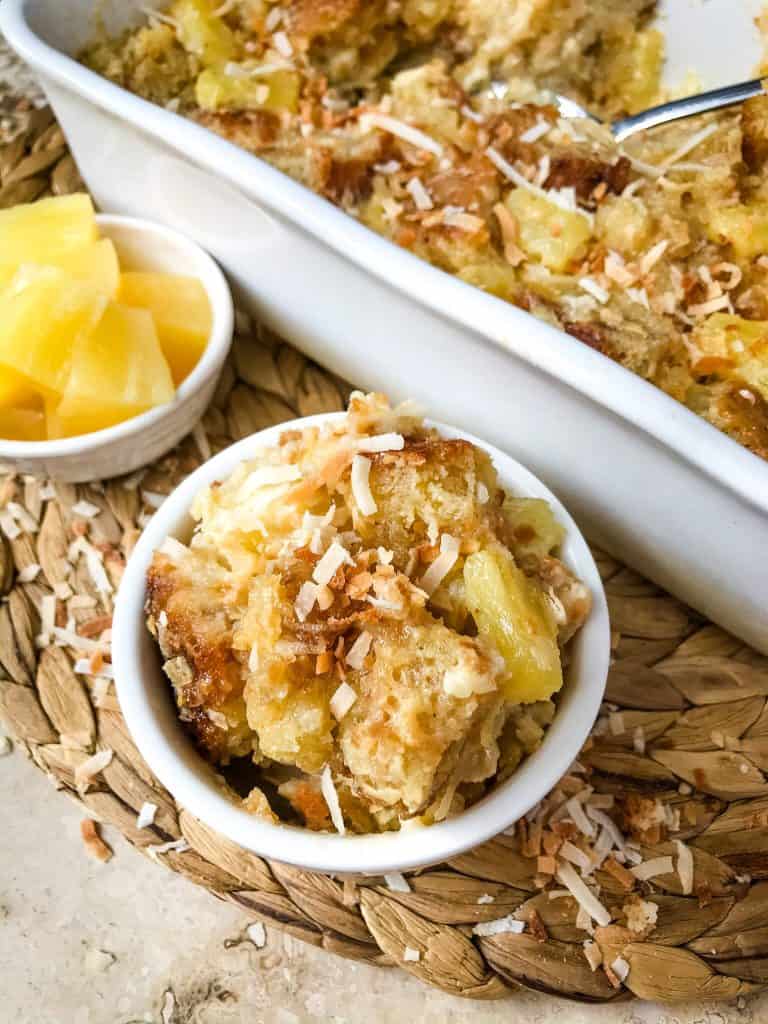 I used to not be a big fan of coconut, but I learned that it was more the artificial taste that I was not a fan of. By using real coconut and coconut milk, the flavor is completely different. No coconut extract here! And with this Pina Colada Bread Pudding being so rich, you can easily get more than 8 servings out of it. 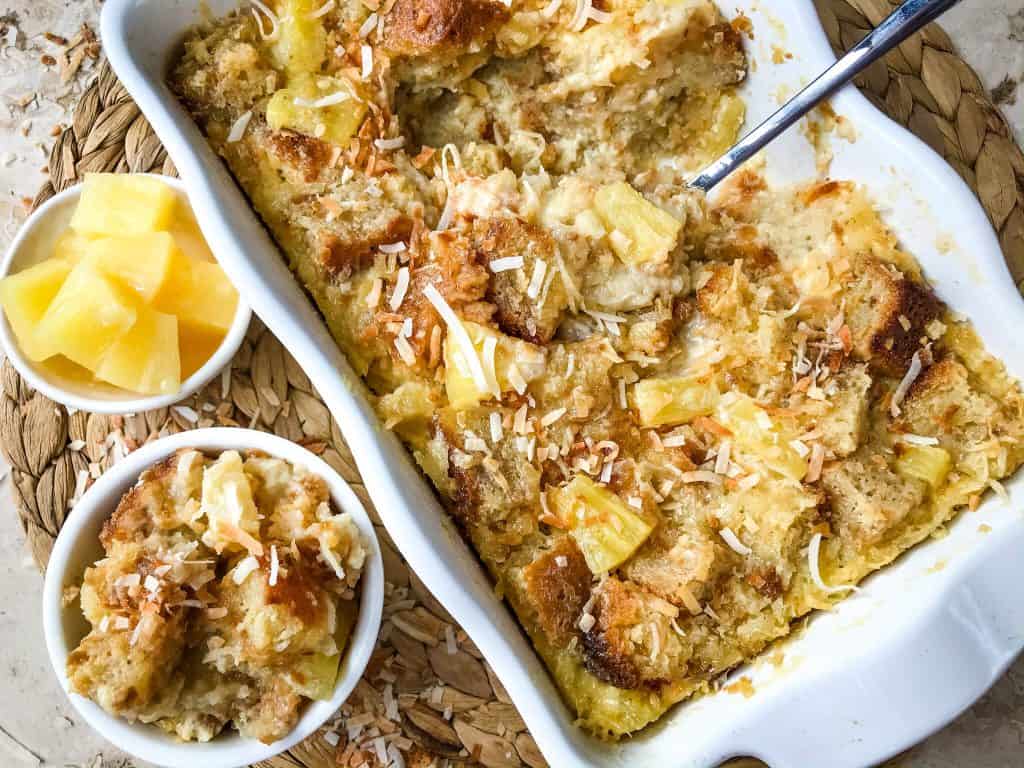 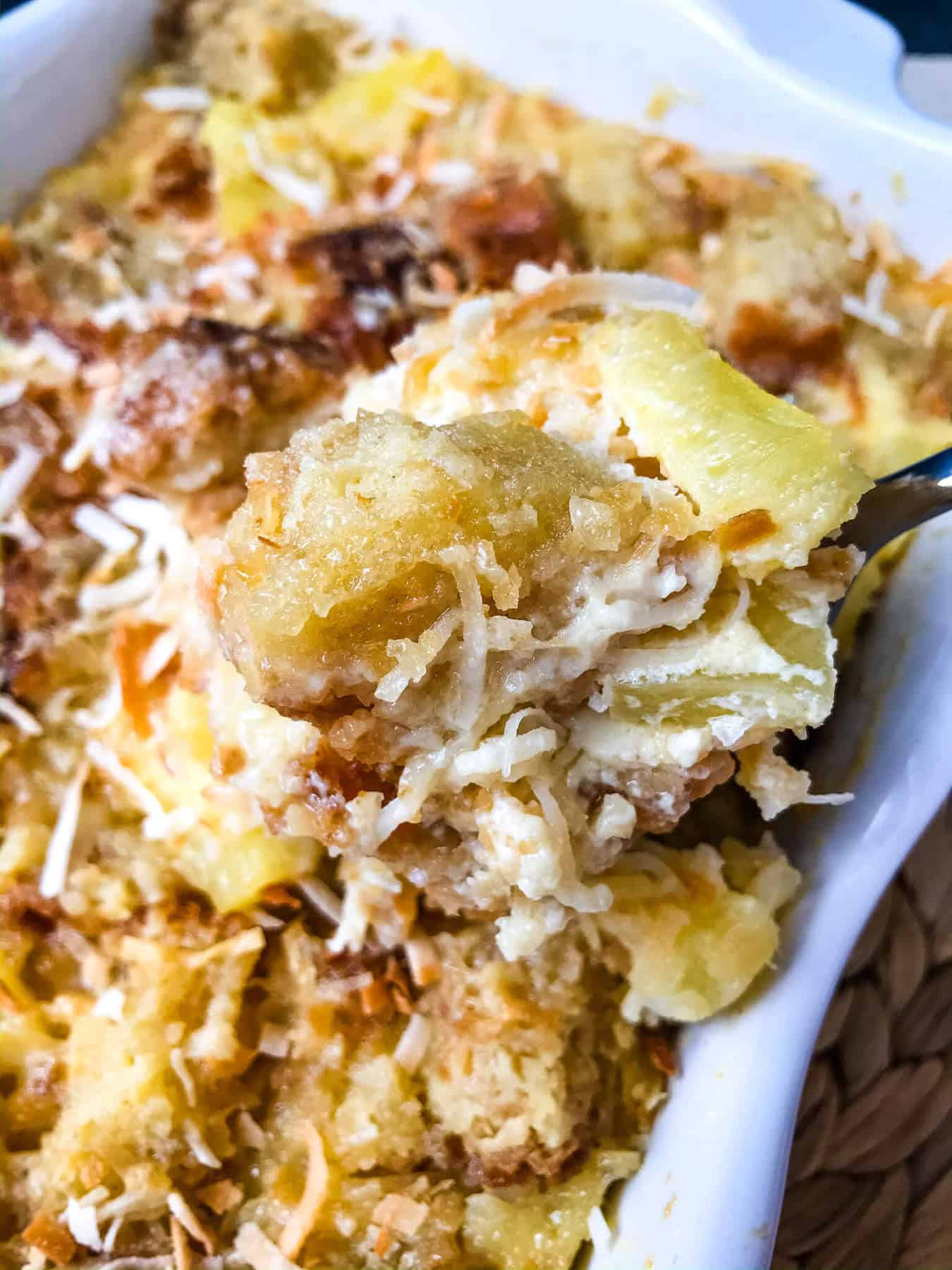 Our Quick Coconut Bread is best for this recipe because it brings extra flavor, but any type of bread will work, especially a crusty bread like French or rustic bread.  A 9.5 inch loaf was the perfect amount to get 8 cups. You can let the bread soak in the refrigerator for up to 24 hours if needed. Both canned and fresh pineapple will work great here. Toasted coconut has a deeper flavor than without toasting, but you can use either.